This month, Kindergarten worked hard to play djembe drums or hand drums to a steady beat. They practiced alternating hands as they played. They later added rhythms on rhythm sticks to the drums to play two different parts of the piece at once! 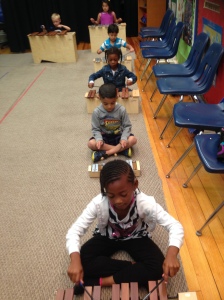